The middle is a lonely road, unless you're not alone

"Sharpen up your teeth your dreams are more than worth defending, in a fight that's never ending, go on...go ahead and prove me wrong."-The Used <---yes...

There's this place, called the middle, some of us know. It's the place where you're not new but not yet seasoned. Not a beginner not yet published. Not absent of hope but not full of it either (full of something, maybe). The middle is for the strong, the non-quitters, the warriors. The middle is for the hard-workers, the dedicated, the determined.

This is my middle: 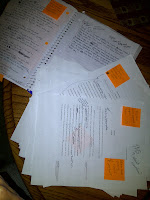 But the end is in sight.

Tell me friends, are you in the beginning, middle or end of your personal journey?
Candyland. OUT.
Posted by Candyland at 4:38 AM

I am one proud middle-warrior. Thanks for the inspiration and something to carry me through until the middle ear punches me once more, but like it or not I am here for the duration or until I die.

I'm SOoooooo in the middle. This is a fantastic post that has left me inspired and feeling less alone. The middle is a tough place, and the pendulum smacks me in the head at nearly every pass. But when I picture myself a middle-warrior, the throb lessens. Thanks, sweets!

Stuck in the middle with you...

I feel like I've spent my whole life in the middle. Good to know I've got some great company!

I don't think anyone will ever surpass the middle until they die. Seriously. Once we acheive one thing we strive for another. It's never ending!

Your middle looks exactly like mine. Hang in there sister, I know you got what it takes!

I'm definitely a middle at this point. And poetically enough, the song I like to play as a pick me up is "The Middle" by Jimmy Eat World.

Where the heck are all the beginners? There has to be a new class by now, right?

Nicely put! Middler...me. Um, and I hope no one's at the end of their journey. Yikes.

I love it when you do this. Makes me feel so much better. And now you better not get an agent or a deal before me cause then I'll be like

Just kidding. But it does help to have such an awesome friend to feel sorry for myself with, - er, near ... whatever.

hi miss candace! mostly for me theres lots of middles going on. i think miss jessicas right that theres always gonna be a middle. for my writing im mostly in the beginning on one and in the middle on one more.
...hugs from lenny

Is that what the middle child feels like all the time? LoL.

I agree with Matt, I love it when you do this. It really makes a difference in my day.

Middle!! Never been anywhere else. Even the beginning feels like the middle, and there's always a new beginning after every end.

one good thing about the middle, though, is there's a lot of good company

I'm in the middle with you, girl!
Good luck to all of us middlers (middletons? middles?)! Thanks for the inspiration!

Oh! It's so nice to realize I'm not alone in the middle. I hate the middle btw. Love it but hate it. I want that fresh burst of newbie-energy back! Oh well.

This is the perfect post for a Monday. I am soooooo in the middle with you. It's great to know we have so much company! :-)

Oh, the middle is SO hard - much more difficult than the beginning, for sure. Hang in there; you can only go forward!

Fabulous post Candace! I'm totally in the middle, and it's hard in here (I personally think the publishing industry has one of the biggest "middles" ever, because it moves soooooo slow. Just gotta keep the end in sight and move forward. We'll get there. Eventually. :)

You have no idea how much I needed this today, thank you for such a beautiful post - and for the encouragement. We'll all get there, so long as we don't give up. :)

Okay Canday I am super proud of you, I see you are attacking the revisions.

thanks. I needed this. In querying hell with (what I thought) was my best and brightest project. It's been a month and still no requests. I catch myself feeling like if it doesn't happen this time...its just never going to. I know. Totally defeatist but rejection sucks. Almost as much as revisions. Good luck girl and thanks for being there and saying exactly whats going through my mind. I couldve written this post today.

Yeah, I'd say early-middle. Just finished my ms and ready for edits. It's daunting, but we have to go through it!

Very well said! I'm in the middle and toughening my skin. Truly love this post today. Thanks!

The middle is the journey, and lets face it that's the best part of getting to where you need to be.

Love it, I hand't looked at it like that but I'm kindof in the middle too. Good luck breaking out to the top.

Just barely in the middle. Can't call myself a beginner, but I'm more like 48 steps from the end :)

Is this the book I had the opportunity to read for a critique a few years ago? Go, go, go!

Candyland
I sometimes go by my real name, Candace Ganger and I have a head, I swear. Born in a small village on the outskirts of Ipanema...wait, that wasn't me. Though I was a musician, I'm currently an author of all things YA, an avid road runner, and (obsessive) lover of cats & The Used. Inquiries: Contact Brent Taylor @ Triada US. My debut contemporary novel, THE INEVITABLE COLLISION OF BIRDIE & BASH, will be out July 25th, 2017 via St. Martin's Griffin.