Almost Famous ain't got nothin on this weirdo (ME)

Alas, my friends. I have returned from the big rock show in one piece (kind of). However, there are a few things I learned while away regarding my concert tolerance at the age I am today vs. yesteryear.

Then: Wanna step on my feet while you force your way past? No problem.
Now: "Get off my feet, tramp! I was here first!" *ahem* Of course I said it in my best, sweetest lady-like voice.

Then: Oh, you're trying to mosh and I'm in your way? That's okay. I'm alright with getting slammed in the head with your elbow. We're young. Let's push each other and get angry to the music for no apperant reason so those around us can't enjoy the big show.
Now: "Get the BLEEP off me BLEEP BLEEP!" *Insert elbow stabs to their eye*

Then: Wanna raise your arms over my head and tell the world you either didn't shower or didn't fragrance your (as Lilliana calls them) pit-pits? Absolutely. We're here to rock and sometimes rock smells.
Now: *Gags* "What's that smell? Ugh. I'm gonna vomit." *Pinches nose and turns away*

So maybe I'm not cut out for the big shows like I once was. But you know, there's one thing we all have in common: The love of the music. So different, we all are, yet, so much the same inside. Let me take you on my final Bert journey for the time being ala Tahereh style.  The ride there was long. But not too long. Just right. 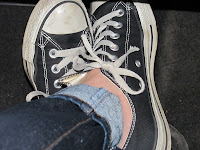 Then, when we got there three+ hours later, while driving around and discussing (arguing) where/what to fill our bellies with, we saw bassist, Jepha, strolling along the sidewalk-LIKE A NORMAL PERSON *gasps* I don't know about you, but I always thought they had super secret rock star hover crafts to get from place to place.

After said fill-up meal (the fastest, greasiest meal I'd ever eaten), we drove past the big, shiny tour buses (totally unintentionally) about five times, looking for a legal place to park. The strangers outside probably thought we were giddy fan girls (the hubs, maybe...)...

Upon parking, finally, we crossed the street where said tour buses sat. Two men stood outside the pink one, tossing a football. As we breezed past, I turned around to see the drummer.

"Hey, Dan," I said in my pretend casual voice.

He clutched the ball against his side. "Hey, how's it going?"

We kept walking, because it was the most cool I've ever been and I didn't want to ruin it. "Pretty good," I said, distancing further.

"It's pretty boring today," I heard him say as we rounded the corner. Yes, he was still talking to me, and yes, I ignored him before we resurrected my inner d-bagness.

We found the line, with an hour until doors opened, and faded into the building's exterior, eavesdropping on the wacky college kids around us (and taking pics of our feet). 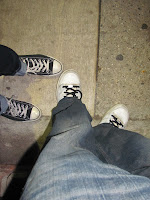 Once the doors opened, and we found our spot dead center in front of the stage, the first band went on, and for the second (or third, or fourth???) time in the last week, I fell in love. 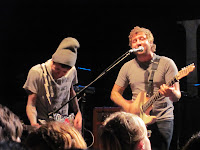 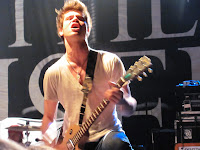 They're called New Medicine. If you haven't heard of them, I will cry for you because they seriously ROCK. When they were finished, we waited some more, through another band, Chiodos. 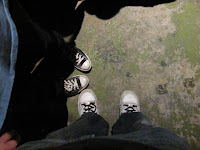 And, modeled near the trash cans to show my inner Scum. 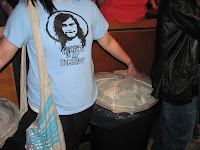 Then (finally. Silly, tardy rock stars), there they were in all of their sweaty glory. By this time, we'd been knocked stupid from our spots. It was an 18+ band on a college campus. Catch muh drift? A lot of youngsters lookin' to break free from their shackles and get crazy. Unfortunately for me, it meant losing my place. But I digress. We were still super close.
And I got to see this guy<----BERT <3 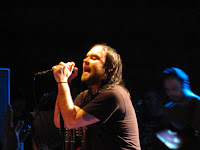 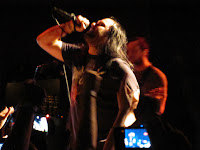 After the show, we got our obligatory passes (because we cool like dat) and again, a third chance to redeem what's known as "The D-Bag Incident" of '07. (No cameras allowed *pouts*)

Bert: Hey. *smiles*
Me: Points to my sweet shirt and says nothing

Bert: *Stands from chair, pulls my shirt taut and signs*
Me: Thanks. *smiles like goon* Great show tonight.

Bert: Thank you very much. *Lingers in my stare. Our eyes become one, melting and erasing the world around us. The music chimes in. He smiles. I smile. We all freakin' smile. I see no one's face but his, and he sees every girl's face, but mine too.*

Then I'm shoved down the cattle line while his eyes follow me. Literally. They stayed with me like he was watching his lover depart (at least in my mind)...So, no pictures to document the brief affair, but along with my purse (signed a second time in the last week), I have proof of his hand. Touching. My. Shirt. 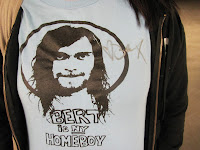 The show was great, the getaway was even better, and I now know even more why I write. To create fans like me. The ones who drive hours to your show (book signing) and stand in line for hours just to get a glimpse of the person who gets them-without even knowing them. His music does it for me, and I hope to pay it forward with the stories I tell.

The ride home was bittersweet. My days of band-hopping, playing, staying out all hours, hanging with musicians are kind of gone. At home, life stands still. The days blur, as I wait for answers to queries or fulls or partials or anything. But in those moments where I stood, singing along with the hubs and my favorite band dude, I was in motion, not waiting. Not wondering. Just...alive. 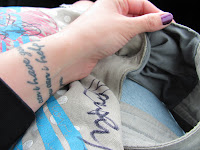 What are you waiting on RIGHT NOW? How do you pass the time?

-Candyland. OUT (and missing The Used already)
Posted by Candyland at 5:20 AM

OMGosh, you remind me of myself. That was so me before I turned thirty, had four kiddos, a husband, the dog, and gave a damn what anyone else thought. I still care, don't get me wrong, but now I'm wiser, looking at the source of the *shoe-stepping*. ";-)

Love this post. You had me giggling and moving up and down in my seat. See myself in you way too much. HA!

I love, love, love concerts. I also love the detailed play by play of yours. I was at one last week and I laughed at your reactions a long time ago vs now. I was in the front of the general admission audience and the lead singer says, "Get closer, everyone take three steps forward, which of course I couldn't because I was in the front but was totally smushed by everyone behind me. Ahhh, the joys of seeing your favorite bands up close!
The Used is cool by the way!!! I recognized Bert on your shirt right away!

I've never been to a concert so you are (by far) WAY cooler than me!

I'm not much of a concert-goer in real life (can't stand crowds), but I sure enjoyed your experience vicariously. And I didn't even have to smell anyone's stinky pit-pits. ;)

I'm waiting on going to the Bon Jovi concert this summer where I'll be thinking the exact things you were at yours.

Gone are the days when I don't mind being squished together with other sweaty bodies. ;)

Pit-pits is hilarious. Love it. :)

I've noticed too that I'm much less tolerant of concert chaos than I used to be.

I'm not familiar with this band, and haven't been to a show in years, but it sounds like you had a lot of fun!

Thanks for sharing Candace.

Okay, You are super cool in my book. I haven't been to a concert/performance in years! But yeah, I feel like I'm waiting. All the time. Hopefully the wait will be worth it. =)

Candy your stories are only further evidence that you are cool, not the other way around like you've tried to make me believe. Just walking by the drummer and not rushing back when he kept talking....classic. cool. I wish I could meet my boyfriend, but Hugh Jackman doesn't have time for me these days. I should totally dump him.

You are a riot! I love it... you're like the coolest of cool! Lovin' the stories you tell!

I'm not a big concert fan. I hate standing up for long periods of time! God, I sound old.

I love reading your stories, though! Keep them coming.

Ha! I used to love The Used. I mean, I still like them, but it's just not the same. I totally know what you mean about concerts then and now. Back then I left with a great euphoric rush, now I leave with a headache. But it's still fun.

I'm working on revisions, and thanks to my kick-butt critique buddy, making some progress.

i pretty much snarfed all the way through this post.

you are too funny!!

AND LOVE THE SHOES!!

Fun!! And you have my shoes. I wear black chucks too. Sweet. xo

Fun!! And you have my shoes. I wear black chucks too. Sweet. xo

Candyland
I sometimes go by my real name, Candace Ganger and I have a head, I swear. Born in a small village on the outskirts of Ipanema...wait, that wasn't me. Though I was a musician, I'm currently an author of all things YA, an avid road runner, and (obsessive) lover of cats & The Used. Inquiries: Contact Brent Taylor @ Triada US. My debut contemporary novel, THE INEVITABLE COLLISION OF BIRDIE & BASH, will be out July 25th, 2017 via St. Martin's Griffin.